When I began researching my family history one of my first finds of interest was my 3rd great grandfather B. C. Bryan – Berrian Clark Bryan. His father settled in Dahlonega, Georgia – a small community nestled at the base of the Blue ridge mountains in Lumpkin County. When they first arrived in 1831, they lived among the Cherokees who dominated the area at that time.

My Bryan’s lived in Lumpkin County, which became very well known in 1834 when gold was first discovered there. Soon this small community over-flowed with miners setting up camp and claiming land rights to mining areas. This area today still has two mines open to the public, but there were several large mining operations in that community, all at one time. The gold used on top of the Georgia Capitol building actually came from Dahlonega. It was hauled to Atlanta by several wagons, pulled by teams of mules.

Berrian Clark Bryan – After 1900; Note he’s wearing his medals – one being the Southern Cross Medal I believe he was awarded in 1909.

While serving in the Civil War, Berrian was wounded by a bullet to the face. In 1909 he was one of the first Civil War Veterans awarded the Southern Cross medal – in the many pictures I have of him today, you can see it pinned on his coat. I’m told he was very proud of that medal and always wore it. He was one that enjoyed his picture taken, never refusing a photo opportunity.

B.C., as he was often called, built a log cabin in a hollow across from Cane Creek. It was the perfect spot, as the running water across the way yielded him water for his farm. He farmed his land up until the age of ninety-nine; he was short a few months of turning one hundred years old when he became ill and died. It was written in the local paper that up until his death, you often saw Mr. Bryan walking into town to cash his monthly pension check.

After the Dahlonega Nugget newspaper wrote a story about my walk to find his old home-place, I was contacted by a local cousin, Clint Bryan, who had just discovered that B.C. Bryan was also his grandfather. He invited me to come and present a wreath on his grave at a special ceremony given by the Sons and Daughters of the Confederacy. 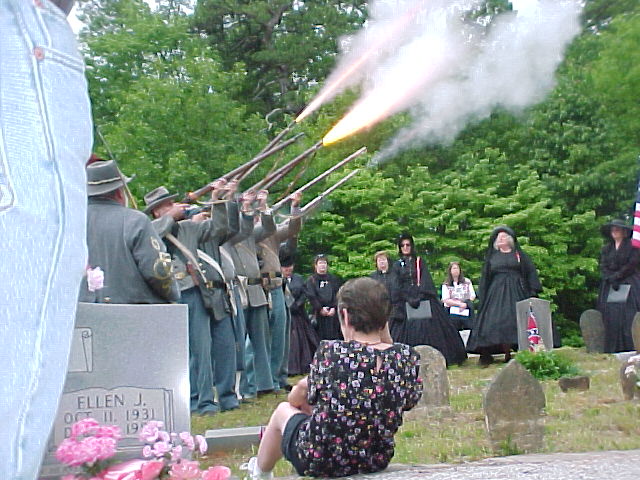 It was quite an event seeing the men dressed in period uniform, complete with working muskets and the woman in their long black billowing mourning dresses. As I stood at the graveside listening to the sound of the drums, as they marched to the grave, it took me to another time. After a brief ceremony, the men gave a final salute with the firing of their muskets to honor the life and service of Berrian Clark Bryan.

My mom told me we went to a Bryan family reunion once when I was very young. She remembers going to the house by driving down through several pastures, opening gates as they went. The house there was built by a creek with running water under the porch. Another memory that stuck with her was of the women killing the chickens that day and serving some of the best fried chicken she ever ate. How I wish I had been old enough to have a memory of first meeting my family in Dahlonega.

The town of Dahlonega holds a special place in my heart for I’ve met and made many new friends there as well as new family. If I had never researched my family, I would have truly missed out on visiting this area and learning its history.

My blog is at: https://everyonehasafamilystorytotell.wordpress.com/
View all posts by Jeanne Bryan Insalaco →
This entry was posted in 52 Ancestor Stories and tagged Berrian Clark Bryan, Dahlonega, Georgia, Lumpkin County. Bookmark the permalink.

Ready to Take on the World

From the Perspective of a Young Almost-Real-Life Adult

"If you have a garden and a library, you have everything you need." Cicero