My middle name of Lee came from my Uncle Leroy, my mothers only brother; an uncle I never knew. He was one of the many young soldiers in WWII who never came home.

Leroy was born in a log cabin in Siloam, Ga.to parents Edgar and Ola (Askew) McKinley on May 19, 1924. From a young boy he shared more of a closeness to his mother – he could do no wrong in her eyes.

Being a boy born to a farmer, he was destined for many chores. He quickly learned how to milk cows and until he left for the Army, he did that every morning and evening. In the late afternoon he’d gather Bessie, the bell cow, and herd her up toward the barn, the others fell in behind from the clanging of the bell around her neck. That same cow bell sits in my home today. His sister Helen, my mother, often ran ahead, climbing up in the persimmon tree to wait for Bessie – she’d slide on her back for a ride.

Once he began milking the cows, his big golden kitty named Clark Gable always showed up – waiting for his milk squirts, amongst his fathers yells to hit the pail – not the cats mouth! But Leroy never listened, Clark Gable sat patiently on the stall ledge eyeing Leroy’s hands, just waiting for that milk stream to come his way!

Leroy was proficient with a rifle, he daily hunted for squirrels and rabbits and took great care with his rifle, never leaving it laying around. He knew better – his father would have taken it away if he was lax in safety. They were taught respect in the handling of firearms, and if you didn’t, you lost your privilege.

As Leroy was up early every morning, he sometimes  hunted early and brought back fresh frog legs hoping his mother would cook them for breakfast. He knew that once her wood stove was burning, it was time for cooking. Frog legs were one of his favorites. 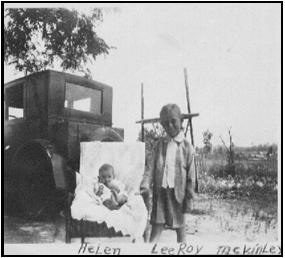 Model T that Leroy dismantled more than once!

Taking things apart and putting them back together was what Leroy enjoyed best, and good at; he was very multi-talented. After his father bought the Model A and parked the Model T with the rumble seat under the car shelter, it became Leroy’s toy. His father was quite irate the day he discovered Leroy had completely taken apart the whole car and had it all laid out on a sheet – but it all went back together with no problem. He often took it apart just for something to do. It was a sad day when it was sold for fifteen dollars.

School wasn’t Leroy’s favorite but the game of baseball was. Once his sister Helen learned that he was on the school baseball team, she quickly made it clear to all the girls who lined up to watch him play, that she was his sister. It is told he could hold his own even against the older team players. Whatever he did, he did well.

What he wasn’t proficient at was his school lessons and because of that the principal pushed the local recruiter to draft him for the Army. And even though he had asthma and was an only son, they drafted him before he even graduated. His mother was devastated! He entered the Army on November 6, 1943. The day he left turned my grandmother into a changed woman.

While in boot camp he met Catherine DeRango, and like so many young men that were destined to ship overseas, he fell in love; they quickly married  in Mineral Well, Palo Pinto Co., Texas on Feb. 26, 1944, before shipping out. 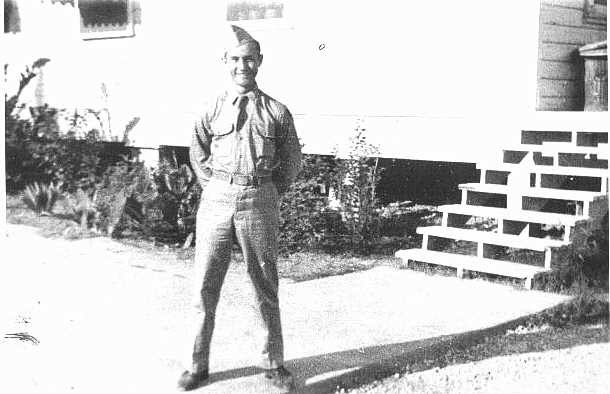 After Leroy shipped out, his new bride came to spend time with his parents in Siloam; she was from Racine, Wisconsin a much colder area than Southern Georgia. Catherine also had grown up on a farm and enjoyed her time with them on their farm and his sister, my mother. Soon after she returned back home they learned that they were divorcing.

His mother regularly packed boxes to Leroy – his favorite jam cake was always inside. Being a good boy, Leroy often took time to write his mother, at least what the Army would allow. Mail was highly scrutinized and sometimes words were blacked out. She wrote many letters back to him. 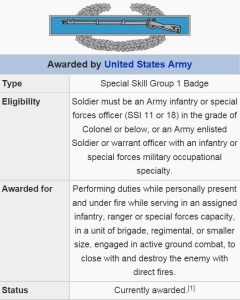 His medal, as pictured, was passed to me and I have kept it in his honor. Thank You for your service Uncle Leroy!

He earned an excellent rifle marksmanship medal while in boot camp; I’m sure that helped to send him on the front line with rifle in hand.

The divorce came a few days before Leroy landed in Metz, Germany. Days later on Feb. 19, 1945 he was shot immediately and killed while on a detail mission in town. His commanding officer told his parents that he was killed instantly;  never suffered or lingered in pain.

As blackberries were plentiful on the farm I just bet Grandmamma McKinley made a blackberry Jam cake.

Before his mother learned of his death by a visit from the Army, she received one of her boxes back with the  jam cake inside. When that box came she fell to the ground crying, she knew in her heart that her only son was gone. She became a changed person after his death, her mind slowly deteriorated, losing her will to function and she withdrew from life.

Leroy’s body was not returned for burial until around 1950, after the war ended; they buried their only son at the young age of 20. The McKinley name was never to be carried forth in our family, but in a way today it will be carried on as his great-great niece, my granddaughter, is named McKinley. She will carry the name forward and learn about her name when she is older.

Several years ago I began searching for Catherine DeRango – and one day I hit on her name from an obituary of her husband. I contacted one of her sons and made contact with Catherine herself. We chatted on the phone and exchanged several letters. She was quite shocked that I searched her out and was excited to talk to me and learn about my family; she often had thought about and remembered the times she spent on the farm with my mother and grandparents. She told me that she even had kept the quilt my grandmother made for them when they married.

I am proud to have given my first daughter the name McKinley Lee. She will carry the family name and one day she will understand why it is important to remember and know family “roots”.

McKinley Lee has some tall shoes to fill carrying that name and I definitely see “McKinley” traits in her disposition! McKinley’s are very strong willed and stubborn!