Evelyn Irene (Little) Bryan, my father’s mother and the only grandmother I have memories of watching as she cooked. My story “Week 5: Feb. 1, 2014 Heirloom Recipes – Family History comes in many forms” – was partially written about her Sweet Potato Cobbler I so remember and loved; it was my grandfather’s favorite, so that meant it was served often.

Evelyn was born October 14, 1906 in Chatooga Co., Georgia to parents Eugene Little and Alma Wilson (1886-1929). She was the only child in this marriage as Eugene Little died while Evelyn was a baby I”m told, but I have my suspicions she was a little older; he died in Blairsville Ga. from written family records, but I have not found a record of him as of yet. Evelyn moved to Oglethorpe County with her mother who may have wanted to be closer to her only brother, James D. Wilson. I believe Alma met John Gossett in Oglethorpe Co., and if she did, it wasn’t long before they moved to Alabama. By 1920, Evelyn soon had four half siblings – Beulah (1909), Jocie (1911), Louise (1913), and John Williams Jr. (1919) Gossett. Evelyn attended the high school in Union Point and graduated in 1923. (On the death certificate of Alma Wilson Gossett it noted she was born in Milton Co., Ga. and her father born in VA. On the 1920 census it listed her father as born in N.C. I’m thinking the 1920 census more correct as she gave that record and the info on death certificate was given by others.)

From the January 1920 Census I discovered the listing of Alma Wilson and John Gossett in Oglethorpe Co., Georgia and the following information. Evelyn Little (Bryan) was listed in family under Gossett name, age 12 which made her birth year 1908 abt. but I don’t believe that year to be correct, she would have been 15 years old upon graduation. She was listed as born in Georgia, her father born in Alabama and her mother born in Georgia. She had siblings listed in family as Beulah age 11 (1909) born Alabama, Josie age 8 (1911), born Alabama, Louise age 7 (1913), born Alabama and John W. infant, born (1919) in Georgia. So it seems they moved to Alabama when she married John Gossett – probably for work reasons,  he’s listed as farmer – and they returned before the year 1920. Soon after 1920 they must have moved to Union Point as Evelyn attended high school in Union Point where she graduated in 1923 and began working in the Bryan Scott Sack Mill (later to be known as Chipman Mill) at the age of 16 (probably more like age 17 at graduation) until she retired in 1975 at the age of 62.

The Family Bible of Evelyn and Paul Bryan along with the social history taken when she was admitted to Greenview Nursing home in Union Point, Georgia has given me most of my early information on her school graduation, work record, and how she met her husband. I was given their original marriage certificate and bible from my great uncle Gordon Bryan.

Letters by her half sisters mentioned they thought she had been born in Little Rock, Arkansas but other family members never heard her talk of being born there. I believe now, after finding the 1920 census, that the talk came because three of the Gossett children were born in Alabama.

From the social history it’s told that Evelyn met Paul Bryan during the summer of 1923 after graduation from high school. She met him at a dance in the community; probably a church function – they dated for one year.

Both Evelyn and Paul Bryan worked at the Chipman-Union Mill in Union Point – she was listed as a knitter when she retired. I have no memory of her ever working so she may have left there much earlier. After they married they lived in one of the white-wood mill houses next door to the mill. Paul saved and soon bought enough land to farm and built a house on Binns St., which was the street directly across from the mill. He bought land at the end of this dead end street – which yielded him much farm land around his house. (I married in 1971 and have no memory of her still working at that time – it was from the social history that gave the dates of her retirement in 1975. My mother married her son in 1948 and tells me she wasn’t working so she must have never went back after having children, unless she worked part time.)

Their first child, Robert Floyd Bryan, was born in 1925 and their second son, my father, Harold “Clayton” Bryan, in 1928. Soon after My father was born, he built a house and moved his family. 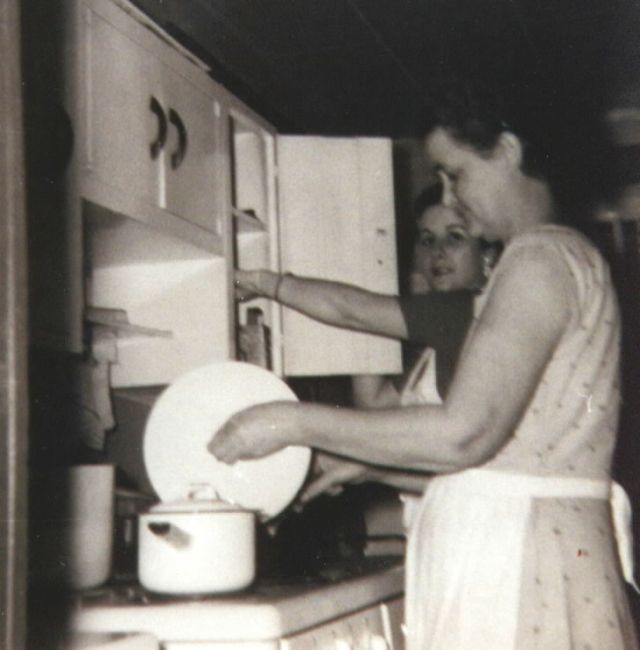 I have many memories of my grandmothers cooking as we often ate Sunday dinner there on their large screened in back porch. In the summer months we ate all our meals outside, only when it was cold did we ever eat in the dining room. She always prepared a large Sunday dinner and always with biscuits, usually two meats, one was always fried chicken, along with many vegetables from their garden. There would be cream style corn, black-eyed peas, green beans, lima beans, mashed potatoes, sweet potatoes and whatever else was freshly picked that morning. There was always dessert, and since Granddaddy’s favorite was sweet potato cobbler, it was served quite often. The only other dessert I remember was german chocolate cake. You often found my grandmother on the back porch, in the cool of the summer mornings, shelling beans for the afternoon dinner.

I have faint memories of standing by her in the kitchen and watching as she layered the sweet potato slices in a buttered dish. Through the help of my cousin Charles Bryan, and many hours in the kitchen devising a recipe, I eventually came up with the taste I so remembered. My recipe is shared in another story mentioned here titled Heirloom Recipe.

A Watts Ware Bowl like the one she used

She often made her biscuits in the same bowl every time, it must have been her favorite; it was a Watts Ware apple pattern bowl. She had two bowls she favored in baking and they remain in the family today with a great-granddaughter.

In 1986, Evelyn  suffered a stroke and was confined to Union Point Greenview Nursing home as Paul could not care for her at home. After a short time she died on March. 30, 1987 and was buried in Wisteria Cemetery in Union Point.