James Bryan, my fourth great grandfather was born in 1791 on Indian Lands, although the obit I recently discovered listed Sumter County, but it was not in existence at that time of his birth.

For more information on James Bryan see Week No. 29 https://jinsalacoblog.wordpress.com/2014/07/20/week-29-52-ancestor-52-week-blog-james-and-elizabeth-cain-bryan/

The United States declared war with Great Britain on June 18, 1812, partly from issues unresolved from the American Revolutionary War; trade restrictions were the biggest issue. This was a war fought both on land and at sea when America took on the greatest naval power in the world, Great Britain.

James Bryan was twenty one years of age when war broke out again with Great Britain. Our country was probably just recovering from the Revolutionary War, which had ended in 1783 – a short twenty three years previous.

My James Bryan was still single at this time, and I assume still living with his parents John and Nancy Bryan when he enlisted in Captain Benjamin Cleveland’s Company, 1st Regiment, GA. Militia. August 24, 1813 in Franklin Co., Georgia. Rate of pay was listed at eight dollars monthly – makes me wonder how far that actually took a person in those times? 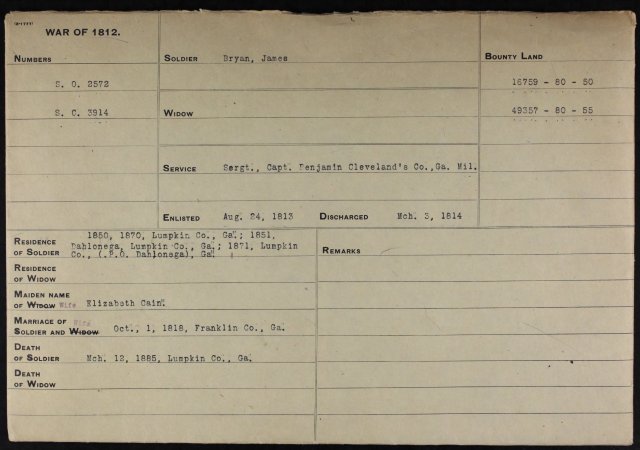 There are “bounty land” lots listed on his pension record, but I’m not sure if he was ever able to claim or claimed Bounty Land (16759– 80 – 50)  and (49357 – 80 – 55). Land lots were offered to entice the men to sign up, and the promise of land after the war was a big draw for many men. I have not researched those bounty land lots, but have read that if the soldier never claimed them and heirs claimed later that there could be much genealogical information on them; I would be interested to know if you have researched bounty lands and can offer me any information on what you found and how to.

Also from this original enlistment record is where I’ve documented the marriage to his wife Elizabeth Cain on October 1, 1818. If the government accepted it on his pension records – then who knew better at that time, then he did, of who and where he married. I have never located an actual marriage listing for them in the Franklin County records as of yet, or has any other Bryan researcher at this time – and we have all looked; another lost record! 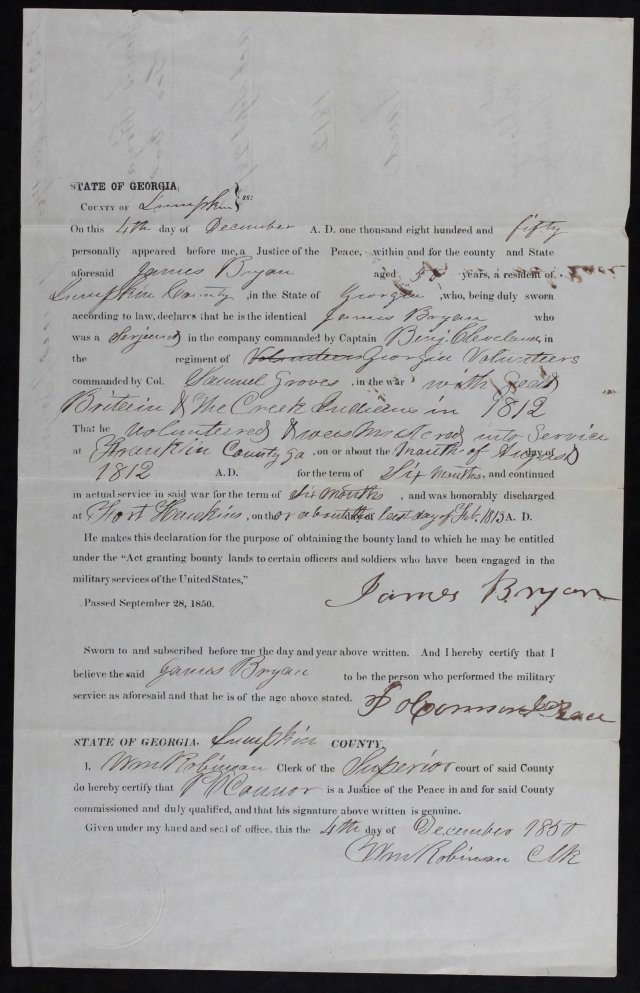 This document dated December 4, 1850 seems to possibly be where James might be trying to apply for his bounty land as he makes a declaration here under the “Act granting bounty lands to certain officers and soldiers who have been engaged in the military services of the United States.” Also listed on document – Passed September 28, 1850. (Was this the beginning of when they could begin to apply for their land – why did it take so long?) 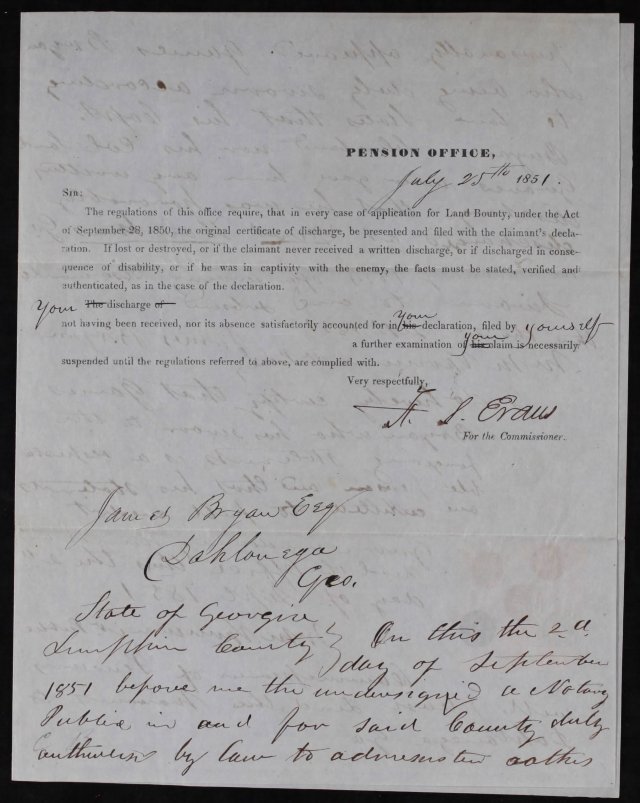 Even government bureaucracy of “I don’t have your documents” went on in those times also. This letter, six months later, is telling James that every application for Land Bounty, under the Act of September 28, 1850, requires the original certificate of discharge to be presented and filed with the claimant’s declaration of disability… and your discharge not having been received, nor its absence satisfactorily accounted for your declaration, filed by yourself – is suspended until the regulations are complied with.

I can just imagine James when he read that letter and the words that probably flowed out of his mouth….  and on September 29, 1851 a letter was written back to the government pension office by Notary Public Wm. Vancouver (sp). It so stated that James Bryan personally appeared before him, duty sworn according to law, and so stated that Capt. Benjamin Cleveland, and Col. Samuel Groves never gave him any written discharge and that he was honorably discharged at Fort Hawkins, GA. on February 1814, after serving six months.

In looking through the files I did not see anything else in correspondence on this until the letter below in 1870. Did he drop his case and try again later? 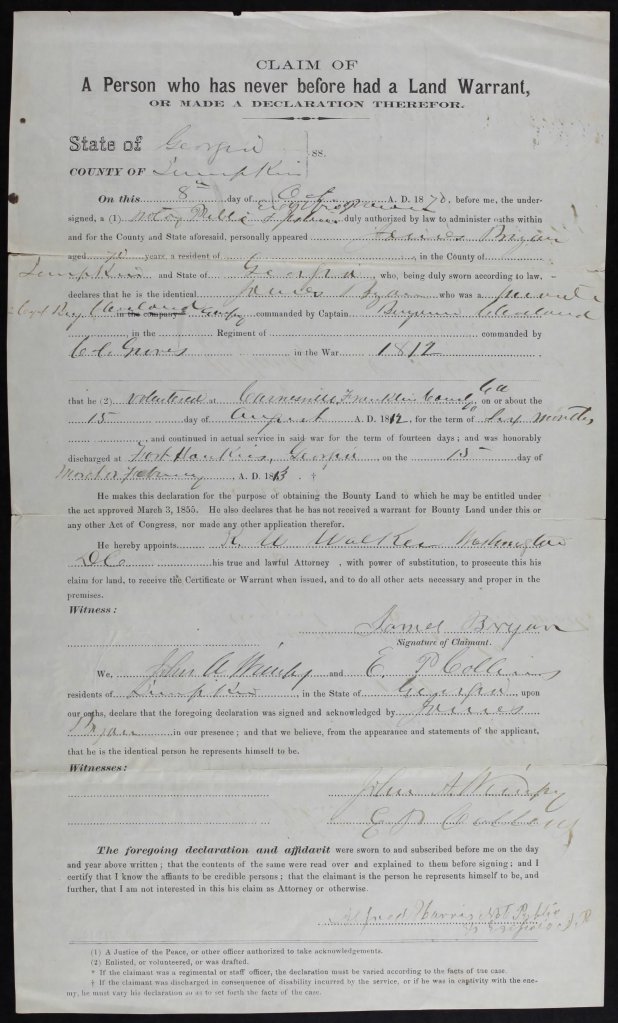 Again, James Bryan is making a declaration, it seems, for bounty land. There are no case no.’s so I don’t know if it’s for the original one or the second one that was on his enlistment record. 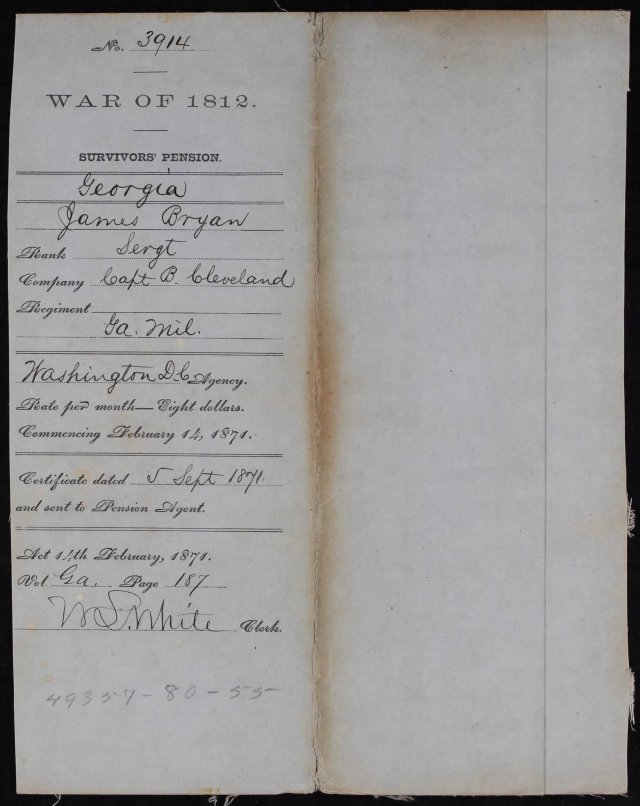 Survivor Pension Record – As I read through the records I found on Fold3.com, I noticed that the Bounty lot 49357 – 80 – 55 was written on the bottom on this document. Did he finally receive the land from that land bounty and now applying for a survivor’s pension through that? 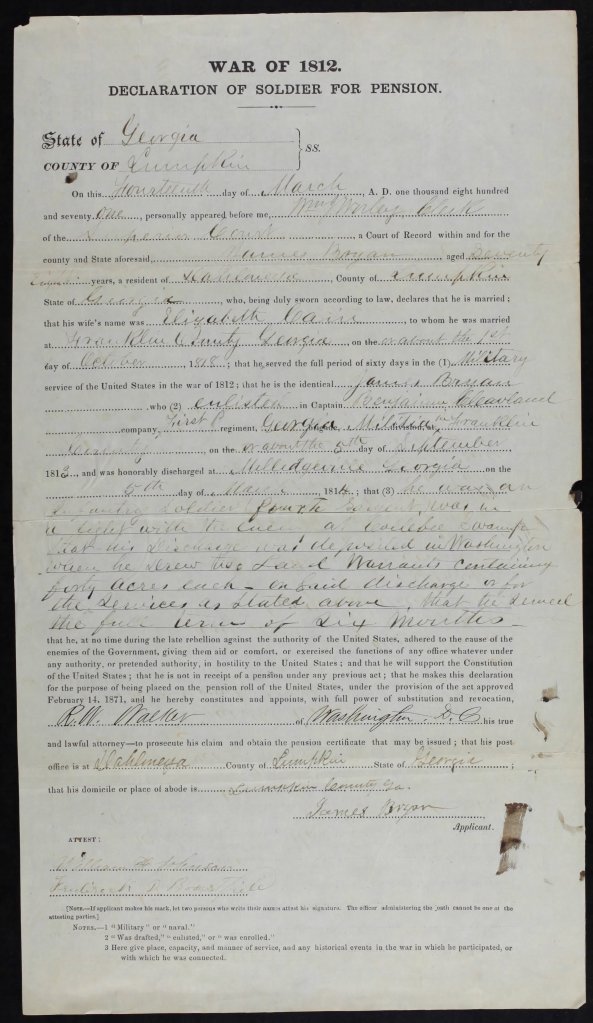 Again it continues on March 14, 1871 with James declaring he was a soldier to obtain his pension. He states that he enlisted in Captain Benjamin Cleveland’s Co., Ga. Militia in Carnesville, Franklin Co., Ga. on or about the 5th of September 1813 and was honorably discharged on March 5, 1814 at Milledgeville, GA.; which is where Fort Hawkins was located. He also states he was a fourth sergeant soldier and in a fight at Collebee (Calebee) Swamp where he drew two land lots and that his discharge was deposited in Washington where he drew two land Warrants containing forty acres each on said discharge, or for the services, as stated above, that he served the full term of six months. (I searched for information on a fight at Collebee Swamp, but found nothing.)

The Battle of Calebee Creek (also spelled Calabee, Callabee) took place on January 27, 1814, during the Creek War, in Macon County, Alabama. There were over 1200 Georgia volunteers involved in this battle.

Could this have been the one he wrote about? I have found it written that he also fought in the Creek War; this might have been it. (From Wikipedia, the free encyclopedia) Through the help of Facebook friends, I was directed to this. Could this be the battle he mentioned? I will have to research this further to see if his unit was one of the Georgia volunteers involved. 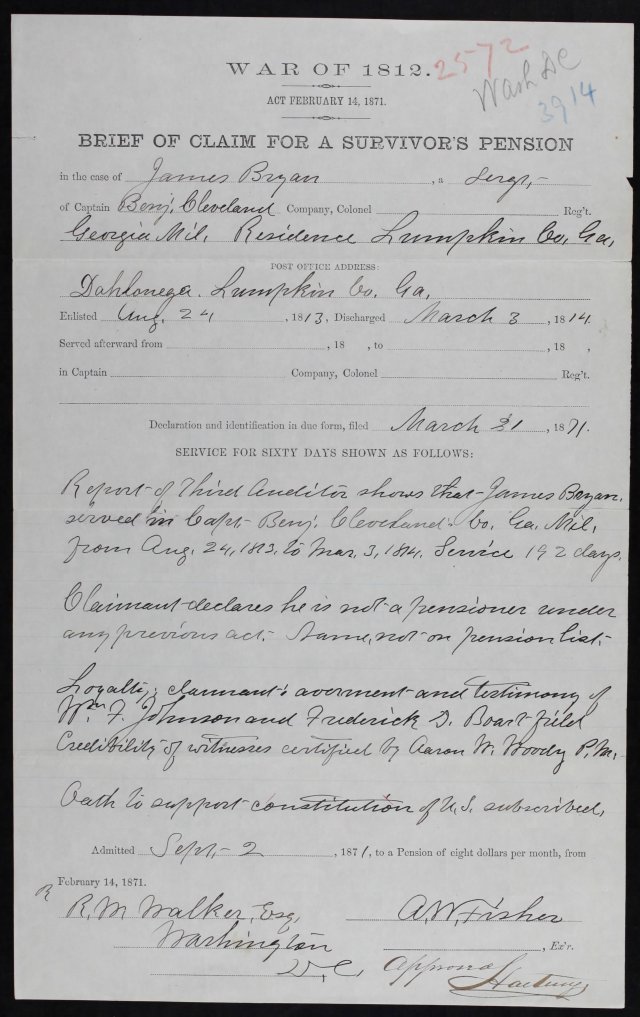 This claim continues for a survivor’s pension stating service from August 24, 1813 until March 3, 1814; service 192 days. James claimed that he is not a pensioner under any previous act or on any other pension list. There is also a loyalty assessment and testimony from W. F. Johnson and Frederick D. Boatfield – and their credibility was certified by Aaron W. Woody, Postmaster of GA. This claim was admitted on Sept. 2, 1871 and James Bryan received a pension of eight dollars per month. Even in 1871, how far did that go in those times? (Was this the first time they could begin to claim a pension?)

I’m assuming that James eventually collected his pension, but I’m not so sure about the land bounty until I research more, as I can not determine from all the records if it was ever granted to him. 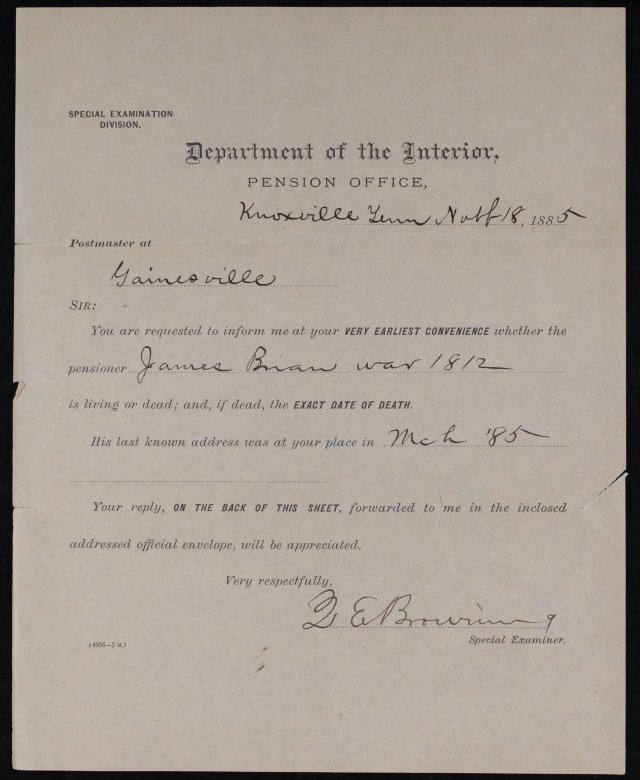 This letter from the Department of the Interior Pension Office, Special Examiner Browning (Nov. 1885?) is requesting whether the pensioner James Bryan War of 1812 is living or dead – last known address was of March 1885. 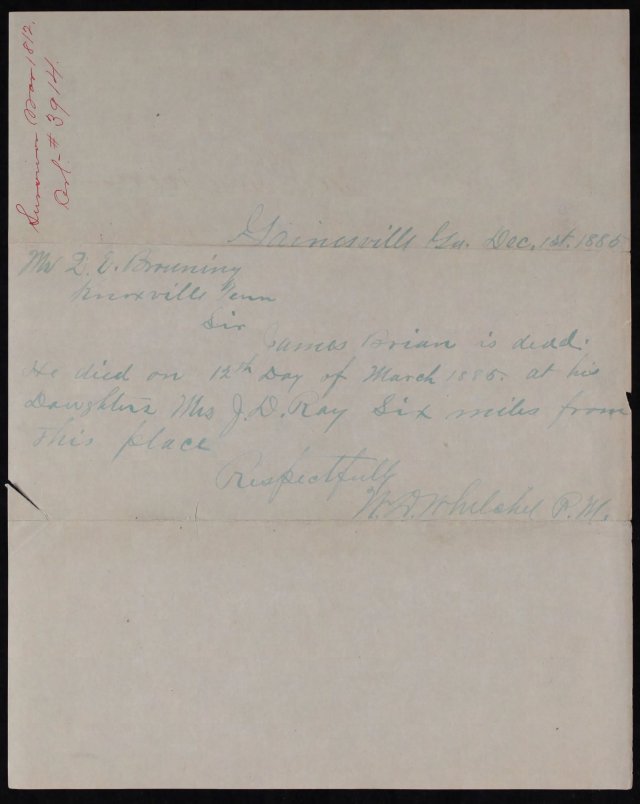 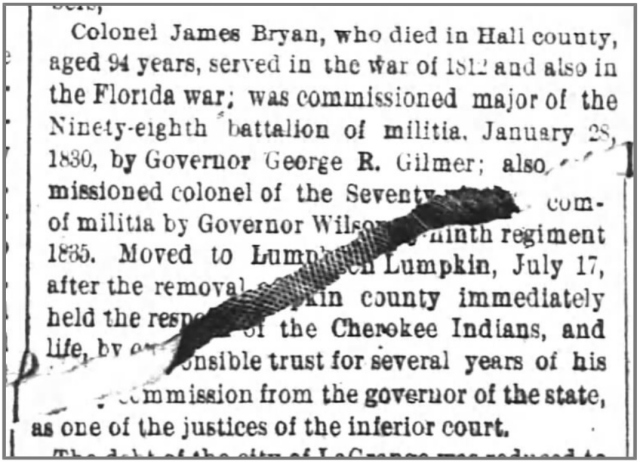 My Bryan ancestors lived through hard times and wars and still continued to live long lives. Here is James living to the age of 94 and his son Berrian C. Bryan lived almost to 100 years of age. Makes you wonder what they did to live such long lives?

My blog is at: https://everyonehasafamilystorytotell.wordpress.com/
View all posts by Jeanne Bryan Insalaco →
This entry was posted in 52 Ancestor Stories and tagged James Bryan, War of 1812. Bookmark the permalink.

Stories Served Around the Table
Living the Dream

Facing My 40 Fears and Finding Myself Through Family History