Rolling on into my Meadows…

Week 50 – Wow where did the weeks go? I don’t know if I really believed I would go this far, but I’m still here with only two weeks left in this challenge. It has been a struggle this year, between work, weekly research and writing, and that NaNoWriMo November novel writing challenge that roped me in – which really stressed me, but I still managed to still stay on track.

Meadows is an English surname, coming from the Old English words – ‘maed’ and ‘maedwe’ which refers to a grassy area, a meadow. The spelling variations are many for Meadows – including Meadow, Meddows, Medows, Medors, Medowes, Medus, Medis, Meadowes, Meadus and Meddus. In England the earliest Meadows families lived in Suffolk and eventually spread over into all of England and parts of Wales. It has been noted that the areas with the greatest Meadows populations was the city of London, Northamptonshire, Suffolk and Lancashire. In Scotland the Orkney Islands to the east of the country also have many Meadows families living there. Within the United States the Meadows families seem to have originated in Virginia and spread out to Tennessee, Alabama, North Carolina, South Carolina, Georgia, Indiana, Illinois, Texas, Missouri and Kentucky. The Bermuda Hundred in Virginia is the earliest Virginia location I’ve found my Daniel Meadows mentioned.

As I began my Meadows research. I discovered much well documented information through the work of Michal M. Farmer: The site is quite extensive and many thanks go to Michal on her early research. http://michalfarmer.com/index.html I was able to follow my lines there to verify what I already knew and add in other information I discovered through Ancestry.

Daniel Meadows was born abt. 1685, possibly in Virginia and married Jane (unk); he died April 7, 1755 in Granville, County, North Carolina. It seems he was found lying dead several yards from his house; the coroner, James Paine, reported him dying of natural causes at the inquest which also included the names of Silvanus Stanton, Mary Medows, and Thos. Morris – their connection to Daniel is not known.

Meadows listed in the 1704 Rent Rolls; Daniel was the only Meadows listed in Prince George County, Virginia. Through the research of another family history, I found Daniel listed as a tailor in 1712 in the Bermuda Hundred; I have not proved that as of yet, but decided to include it here as speculation for more research at a later date.

The Bermuda Hundred was the first incorporated town in the English colony of Virginia; it was founded by Sir Thomas Dale in 1613, just six years after Jamestown. It was a port shipping town for many years but now instead a small community in the southeastern portion of Chesterfield, VA. 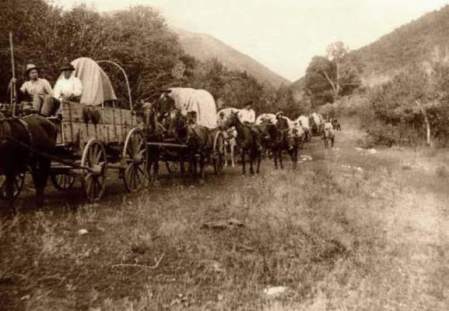 Can you imagine traveling like this? Great Wagon Road: Courtesy of the North Carolina Digital Archives.

Most of these migrants left to settle further westward of the Tidewater, finally following the Great Wagon Road in North Carolina, and the Wilderness Road which led them even further west.

The first deed recorded was when Daniel bought 50 acres in Prince George County, VA. in 1712; In 1717 he bought another 100 acres adjoining. This land was situated near Blackwater Swamp, about seven miles southeast of Petersburg, Virginia. Daniel and Jane began their  family in Virginia before moving back to  Granville County, N.C. about 1752.

We know he was in Bristol Parish, Prince George, VA. in 1740 as son, Isham Meadows, birth and baptism was recorded in the Parish books.

Children of Daniel and Jane Meadows:

Children of Isham and (unk) Meadows:

When Isham Meadows moved from Warren Co., N.C. to Stephens Creek in Wilkes Co., Georgia in 1798, it was son William who moved with his father. William and Isham paid taxes in 1800 and 1801 in Wilkes Co., although he owned no land at that time. By 1802 county lines changed and the Meadows were now living in Greene Co., Georgia. (Warren Co. created in 1793)

William Meadows, born circa 1778 in Bute Co., North Carolina. He married first to wife unknown, married second to Serena Kittrell/Kettrell (b. S.C.) on November 30, 1823 in Warren Co., Georgia. Serena was born circa 1796 and died after April 24, 1873 in Taliaferro Co., Georgia. Her first name is also found listed with several variations from Serena to Cerena and Cyrene. I found her living with daughter Martha in 1870 census. (Marriage record found in Warren Co., Ga. marriage records; very hard to read the last name and along with others, we have concluded the spelling to be one or the other. I searched Warren Co., Georgia for families and found families using both the spelling of Kettrell and Kittrell – so at this point I’m hitting a brick wall on finding her parents or concluding the correct spelling; I do find more of the name spelling of Kittrell in South Carolina. Maybe one day I will find a written version of their marriage license to conclude the correct spelling, but as of now – it’s a coin toss.

In 1805 William Meadows registered for the Georgia Land Lottery in Greene County. By 1825 William was paying taxes on 148 acres of land on Stephens Creek and once again county lines changed and the Meadows were now living on those same acres of land in Taliaferro County, Georgia. You may often think your ancestors are moving around, but it’s actually the county lines changing that places them in a new county. Taliaferro County was created in 1825 from Greene, Hancock, Oglethorpe, Warren and Wilkes County, Georgia.

Children of William and Serena (unk) Meadows: I assume the first four children were by the first marriage.

My Meadows line continues through Narcissa Meadows and Joseph T. Sharp, which I have written on previously in week stories posted below: